Born in Sarnia, Ontario, Weir grew up in the Sarnia suburb of Brights Grove. He learned to play golf at Huron Oaks Golf Course, and was coached there by Steve Bennett. Like many Canadian boys, his first sport was hockey; he was a natural left-handed shot, and began playing golf left-handed as a follow-on from his hockey experience. Weir was fortunate in that his godfather's son played left-handed and had a partial set of spare clubs that he handed down to Weir—three woods and four irons. From his earnings as a caddy and pro shop worker, he purchased a left-handed wedge that he used until the grip wore out. When he was 12, he won a junior tournament in which the first prize was a complete set of irons; he replaced his original four irons with the clubs he had won.[3] While working at Huron Oaks, he also met Jack Nicklaus at age 11, when the golf legend came to the club to play an exhibition. This meeting set the stage for a pivotal moment in Weir's career.[4]

Weir gave up hockey in his early teenage years when he realized he would not grow past average size and that golf was his best sport. However, he had received advice that he might be an even better golfer if he switched to playing right-handed. In 1984, Weir decided to write Nicklaus for advice as to whether to make the switch. Nicklaus quickly wrote back and told Weir,

"If you are a good player left-handed, don't change anything—especially if that feels natural to you."[5]

He never thought of switching to right-handed play again, and still keeps the letter, now framed, in his home.[5]

He attended St. Michael Elementary School in Brights Grove and St. Clair Secondary School in Sarnia, winning the Ontario Junior Championship in 1988. He is a graduate of Brigham Young University (majoring in Recreation Management), and won the Ontario Amateur Championship in 1990 and 1992. He tied for 2nd at the 1991 Canadian Amateur Championship, and finished clear second in that event in 1992. He was an All-American selection at BYU in 1992 on the Second Team.[6] 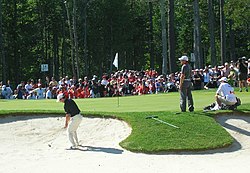 Weir turned professional in 1992, and started on the Canadian Professional Golf Tour, where he won three events. He also played some events on the Asian PGA Tour early in his career. He first reached the PGA Tour in 1998, but lost his playing privileges, due to insufficient performance. He had to requalify, and did so by being medalist at the final Qualifying School tournament.

Weir's first PGA Tour win came at the 1999 Air Canada Championship in Surrey, British Columbia. The victory made him the first Canadian to win a PGA Tour event in Canada in 45 years. He won The Tour Championship in a playoff in 2001.

Weir began the 2003 season in impressive fashion, winning two tournaments on the West Coast Swing. He first won the Bob Hope Chrysler Classic in Palm Springs, California, and then followed with a win at Riviera Country Club near Los Angeles, at the Nissan Open.

In April, Weir won the prestigious 2003 Masters Tournament at Augusta, Georgia, one of the four major championships. He is the first Canadian male ever to win a professional major championship`. When he won The Masters, Weir became only the second left-handed golfer to win any of the four majors, the other being Bob Charles, who won the British Open forty years earlier. Weir is a right-hander who plays golf left-handed, a trait he shares with fellow PGA Tour pro and major champion Phil Mickelson.

In June, Weir tied for third at the U.S. Open, the second of the majors, which moved him to third in the Official World Golf Ranking, his highest ranking.[7] For his outstanding play in 2003, Weir won the Lou Marsh Trophy for outstanding Canadian athlete of the year. He maintained his position in the world's top ten ranking into 2004.

In February 2004, Weir joined the ranks of a select few players including Ben Hogan to win consecutive championships at the Nissan Open, becoming the sixth player in Nissan Open history to notch back-to-back wins, and the first since Corey Pavin (1994, 1995). He was the 20th player to post multiple wins at the Nissan Open.

Weir went more than three-and-a-half years after his second win at the Nissan Open before his next win on tour. Working with Mike Bennett and Andy Plummer on a new swing showed some positive results (two top tens, including a tie for eighth at the Open Championship). While working on the swing changes, he had dipped in the world rankings to a point that he did not automatically qualify for the Presidents Cup matches in 2007, held at the Royal Montreal Golf Club. He got to play in the tournament he helped bring to Canada because he was picked by International team captain Gary Player as one of his discretionary selections.[8] This turned out to be an inspired choice as Weir went on to beat current number one Tiger Woods in a heated match, despite his team losing the Cup. When asked, Weir enthusiastically stated, "When I look back on my career, this may be even more special than winning the Masters."[9] His swing changes, coupled with the momentum from his Presidents Cup performance, culminated in his first win in over three years at the Fry's Electronics Open in October 2007. This victory in Arizona tied Weir with George Knudson for most PGA Tour wins by a Canadian, with eight.

Golf Digest magazine of March 2010 reported that Weir had returned to work with instructor Mike Wilson, who was his coach during his most successful period in the early 2000s. Weir was going away from the 'stack-and-tilt' method and working on reclaiming his swing as developed with Wilson.[10] On October 2010 Weir said he was planning to rely less on swing coach Mike Wilson, since he thought he did not need a teacher but a set of eyes, whether it's Mike or someone else. I'm taking ownership of what I'm trying to accomplish when I make a swing ... I feel like I don't need anybody to tell me what to do. I know what I need to do, added Weir.[11] On July 2011, Weir rehired 'stack and tilt' creators Mike Bennett and Andy Plummer.[12]

Weir's 2010 season ended early with a torn ligament on his right elbow. He began 2011 on a major medical exemption, which means he would have to earn the difference between his 2010 earning and $786,977 (equivalent to Troy Merritt, who finished with the 125th and final exempt spot on the Tour) in five starts to retain full Tour status. Otherwise, he could use one of two special exemptions he holds because of career earnings to play the PGA Tour in 2011, but that is something he hoped to avoid doing.[13] Weir had trouble making cuts and did not finish high enough to retain significant status on the Tour, being demoted to the Past Champions category, among the lowest in the PGA Tour exemption priority rankings.

After an injury plagued 2010 and 2011 seasons, Weir began his 2012 season at the AT&T Pebble Beach National Pro-Am after six months out of the game recovering from elbow surgery. As Weir did not have full status on the PGA Tour, he activated his European Tour membership for 2012, which came after he won the Masters in 2003. He missed the cut at the AT&T Pebble Beach National Pro-Am, finishing at +6. He missed his next two cuts on the PGA Tour following Pebble Beach but made the weekend on the European Tour in the Open de Andalucia. Weir used a special exemption reserved for the top 25 on the career PGA Tour money list to regain his PGA Tour playing privileges for 2013.[14]

Playing on a top 50 career money list exemption for 2014, Weir nearly earned his first win in seven years at the Byron Nelson Championship, but finished two strokes behind Brendon Todd for his first top ten since 2010. The runner-up finish was Weir's best result since his last win in 2007. The result elevated Weir over 350 places in the world rankings up to 238th. Though Weir missed the FedEx Cup playoffs, he finished inside the top 125 on the money list, which leaves him exempt for the 2014–15 season.

Weir joined the TNT broadcast team for the 2016 PGA Championship, as an on-course reporter.

Weir currently lives in Sandy, Utah, with his two daughters. Weir's home course used to be the Taboo Resort in Gravenhurst, Ontario, until the course dropped his name in 2008.

Creekside Estate Winery, near Lincoln, Ontario, began producing wine for Weir in 2005, and as of 2007 had released a Merlot, Chardonnay, Sauvignon blanc, Cabernet-Merlot, Cabernet-Shiraz and Icewine. His Icewine Vidal was named by Travel and Leisure Golf magazine as one of its top five golf-related wines. Weir announced plans to open his own winery in the summer of 2008.[15]

On December 17, 2007, The Thomson Corporation (now Thomson Reuters) announced it will be the lead corporate sponsor for Weir for a five-year term beginning in January 2008,[16] replacing Bell Canada.

Weir withdrew from the 2015 RBC Canadian Open and will take an indefinite leave of absence from golf competition, according to a statement he posted Friday July 17, 2015 on his Twitter account. He called it an "extremely difficult" decision to withdraw from his country’s national open. It would have been Weir's 25th appearance in the event.[21]

Weir was named as a captain's assistant to Nick Price for the 2017 Presidents Cup competition.[22]