Dustin Hunter Johnson (born June 22, 1984) is an American professional golfer who currently plays on the PGA Tour. He is the current World Number 1 in the Official World Golf Ranking; having reached that position with his win at the 2017 Genesis Open.[1] He won the 2016 U.S. Open at Oakmont Country Club with a 4-under-par score of 276 for his first major championship. He had previously finished in a tie for second at both the 2011 Open Championship and the 2015 U.S. Open. He also has five World Golf Championships victories, with only Tiger Woods having won more, and he is the first player to win each of the four World Golf Championship events. He is one of the longest drivers on the PGA Tour, having been ranked in the top five annually from 2008 and leading in 2015.[2] By virtue of his 2017 Genesis Open win, Dustin became only the third player in Tour history to win a Tour title in his first 10 seasons, joining Jack Nicklaus (17) and Tiger Woods (14).[3]

Johnson was born in Columbia, South Carolina, and played collegiate golf at Coastal Carolina University. As an amateur, he won the Monroe Invitational and the Northeast Amateur in 2007 and played on the winning 2007 Walker Cup and Palmer Cup teams. Johnson is the first player since Tiger Woods to win at least once in each of his first seven seasons coming out of college.[4]

Johnson turned professional in late 2007 and earned his 2008 PGA Tour card by finishing in a tie for 14th place at the 2007 qualifying school in December.[5][6]

Toward the end of his rookie season in October 2008, Johnson won his first PGA Tour event, the Turning Stone Resort Championship in upstate New York. Four months later, he won his second event at the AT&T Pebble Beach National Pro-Am, which was shortened to 54 holes when the final round was canceled due to strong winds and heavy rain. Johnson won by four strokes over Mike Weir and five strokes over second round leader Retief Goosen, who shot a third round 74. Johnson finished the 2009 season ranked 15th on the PGA Tour money list.

He continued his Pebble Beach success by shooting 71-70-66 to take a three-shot lead over Graeme McDowell at the 2010 U.S. Open. In the last pairing on Sunday, Johnson had trouble early and never recovered; he shot an 82 and finished tied for eighth (McDowell won the championship).[8]

In the final round of the 2010 PGA Championship, Johnson held a one-shot lead entering the final hole. He appeared to have bogeyed the hole, which would have tied him for first and entered him into a three-hole playoff with Bubba Watson and Martin Kaymer. However, he received a two-stroke penalty for grounding his club in a bunker, thereby dropping him to a tie for fifth place.[9][10] Kaymer eventually won the playoff. 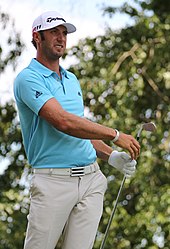 Johnson took part in the Long Drive Contest for charity at the Hyundai Tournament of Champions in January, alongside Bubba Watson and Robert Garrigus.

In March 2011, Johnson entered the final round of the WGC-Cadillac Championship with a two stroke lead over the rest of the field. However he could only manage a final round one-under-par 71 to finish as runner-up behind Nick Watney.

Johnson earned his then-best finish in a major championship in July at the 2011 Open Championship in England. He finished in a tie for second place at Royal St George's, alongside fellow American Phil Mickelson, three strokes behind champion Darren Clarke. Johnson's first three rounds of 70-68-68 left him one stroke behind Clarke and for most of Sunday's round Johnson managed to keep up with him, at one stage being just one back. His final round charge was derailed at the par five 14th, when his second shot went out of bounds and led to a double bogey. This took Johnson out of contention as he slipped to four strokes behind Clarke with only four holes to play. One highlight of Johnson's week at Royal St George's came in the first round when he recorded a hole in one on the par three 16th hole. This result marked the third time that Johnson had been part of the final group on Sunday at a major championship and also occurring in three out of the four majors, the 2010 U.S. Open, the 2010 PGA Championship and the 2011 Open Championship. As a result of this second-place finish, Johnson moved to his highest spot in the Official World Golf Ranking at the time, seventh, and became the third-ranked American behind Steve Stricker and Mickelson.

Johnson won his fifth PGA Tour title at The Barclays in 2011. He beat Matt Kuchar by two strokes. This was his second 54-hole tournament victory of his career, after the 2009 AT&T Pebble Beach National Pro-Am. The tournament was shortened due to the threat of Hurricane Irene. Johnson shot rounds of 66-63-65 to win at -19. This was Johnson's first victory of 2011 and it moved him from 19th to first in the FedEx Cup standings.[11] It was also the second FedEx Cup playoff event win of his career after he won the BMW Championship in 2010. The win also took him to a career high of 4th in the world rankings, the second highest American (behind Steve Stricker). Although he started the playoffs well and held the number one position for the first week, he was unable to continue his form at the three remaining playoff events and did not record a single top-20 in any of them and finished fourth in the final FedEx Cup standings.[12]

Johnson incurred a back injury at home in March and missed over two months of the 2012 season, including the first major at The Masters. He returned to competition in late May at the Memorial Tournament in Ohio, made the cut and finished tied for 19th. The following week he won his sixth tour event, the FedEx St. Jude Classic in Memphis, Tennessee at TPC Southwind.[13]He missed the cut at the U.S.Open the week after, finishing at +9, one stroke outside the cut mark.

Johnson began his 2013 season with a win at the season opening Hyundai Tournament of Champions, an event reserved for winners from the past season. Johnson won by four strokes over defending champion Steve Stricker in an event that was shortened to 54 holes due the bad weather, mainly very strong wind that meant conditions were unplayable. The first three days of the tournament were wiped out, with the field having to complete 36 holes on the Monday and a final 18 on Tuesday. The event was Johnson's seventh PGA Tour win and his third in a 54-hole event; a 54-hole event is still considered an official win with full OWGR ranking points. In November, Johnson won the WGC-HSBC Champions, part of the 2013–14 PGA Tour season.

On July 31, 2014, Johnson announced he was taking the rest of the season off to seek professional help for "personal challenges".[14] On August 1, conflicting reports surfaced regarding the circumstances of Johnson's announcement from the previous day. Golf Magazine reported that Johnson had been suspended from the PGA Tour for six months after testing positive for cocaine. The magazine indicated that this was his third positive drug test, after a 2009 positive for marijuana and 2012 positive for cocaine.[15] However, PGA Tour officials indicated that Johnson was taking a voluntary leave and was not under suspension.[16]

Johnson returned to the tour at the Farmers Insurance Open in February. He missed the cut by one stroke.[17] In the next two events Johnson played, he recorded two top-five finishes: tied for fourth at the AT&T Pebble Beach National Pro-Am; and tied for second at the Northern Trust Open after losing on the third playoff hole to James Hahn. Johnson missed a 12 footer for birdie on the third extra hole to extend the playoff.[18] Those results led Johnson back inside the top-15 in the World Ranking.[19] After another missed cut at The Honda Classic, Johnson beat J. B. Holmes by one stroke to win the WGC-Cadillac Championship at Trump National Doral in Miami, Florida. The win earned Johnson $1,570,000 and marked the first win for Johnson since his self-imposed six-month leave of absence from professional golf to work on "personal issues" in his life. The win moved him to 7th in the world rankings.[20] At the 2015 U.S. Open, Johnson held a share of the lead heading into the final round. Johnson had two birdies on the front-nine but had three bogeys on the back-nine but birdied 17 to get within one of Jordan Spieth. Johnson hit a five iron to the par-5 18th, 12 feet from the hole. He hit his eagle putt to within 3 feet past the hole and then missed the three footer coming back to give the title to Spieth.

Johnson led the 2015 Open Championship at The Old Course after 36 holes, but shot two rounds of 75 on the weekend to fall out of contention. Zach Johnson went on to win the event in a playoff.

Johnson started off the 2016 season well with six top-10 finishes in his first ten events. After two finishes outside the top 10, he came close to winning the Memorial Tournament, finishing one shot behind eventual winner William McGirt.[21] He recorded another top-10 finish in the FedEx St. Jude Classic a week later. Johnson won the 2016 U.S. Open to claim his first major title on June 19, 2016 in his 29th major appearance.[22] The win was shrouded in controversy however as Johnson was given a one-shot penalty after his final round had finished due to an incident on the fifth green. As he prepared to address the ball for a par putt, his ball moved slightly. Johnson stepped away saying that he had not addressed the ball. After he spoke to an on-site rules official he was told to carry on with his shot which he successfully putted. He ended up winning by three strokes ahead of Shane Lowry, Scott Piercy and Jim Furyk. The moving ball incident sparked outrage among many of the world's top golfers with players such as Jordan Spieth, Rory McIlroy, Rickie Fowler and Webb Simpson taking to social media to criticize the USGA for its decision.[23] Johnson moved up three positions in the OWGR to number three after this win.

On July 9, 2016, Johnson confirmed that he would not be participating in the 2016 Summer Olympics, because of concerns over the Zika virus.[24] Johnson won his third tournament of the year, the BMW Championship, on September 11, 2016.

After starting the season with two top-10 finishes in his first four events, Johnson won the Genesis Open in February by five strokes over Scott Brown and Thomas Pieters. The win moved him to number one in the Official World Golf Ranking.[1] In March, Johnson won at the WGC-Mexico Championship by one stroke over Tommy Fleetwood. The win marked the fifth time that a golfer won his first tournament after becoming number one.[27] This was Johnson's fourth WGC title and moved him into second place on the list of most World Golf Championships titles, trailing only Tiger Woods. Three weeks later Dustin would go undefeated at the WGC-Dell Technologies Match Play event for his first WCG Match Play title and his fifth overall WGC title. The win also meant that Johnson would become the first player to win all four of the WGC crowns, the 2013 WGC-HSBC Champions, the 2015 WGC-Cadillac Championship and 2017 WGC-Mexico Championship (previously the Cadillac Championship), the 2016 WGC-Bridgestone Invitational, and the 2017 WGC-Dell Technologies Match Play.[28] This was his third consecutive Tour title through just seven starts in 2017. Johnson would withdraw from the following week's Shell Houston Open.[29] Prior to the 2017 Masters Tournament, Johnson fell down a staircase in the Augusta home he was renting and suffered a back injury.[30] He withdrew from the event before teeing off the 1st hole.[31]

In August 2013, Johnson became engaged to model, singer, and celebutante Paulina Gretzky, daughter of Wayne Gretzky, after seven months of dating.[32] She gave birth to their son, Tatum Gretzky Johnson, on January 19, 2015.[33] In February 2017, Paulina announced she was expecting their second child and that it would be another boy.[34]