William Law Anderson (21 October 1879 – 25 October 1910) was a Scottish immigrant to the United States who became the first golfer to win four U.S. Opens, with victories in 1901, 1903, 1904, and 1905. He is still the only man to win three consecutive titles, and only Bobby Jones, Ben Hogan, and Jack Nicklaus have equalled his total of four championships. He is a member of the World Golf Hall of Fame.

Anderson was born in North Berwick, in East Lothian, Scotland. He was educated at the public school in North Berwick and was a licensed caddie on the West Links at the age of 11. Upon leaving school he apprenticed as a club maker under Alex Aitken in Gullane. At age 16 Anderson emigrated from Scotland to the United States in March 1896—sailing aboard the S.S. Pomeranian from Glasgow—along with his father, Thomas Anderson, and his brother Tom, landing at Ellis Island.[1] He played in the U.S. Open the following year, finishing in second place by one stroke, after Joe Lloyd eagled the final hole.

His first significant win came in 1899 at the Southern California Open, before he started his run at the U.S. Open. In the 14 straight Opens that he played, Anderson won four, was second once, third once, fourth twice, fifth three times, 11th twice and 15th once. He won titles with both the old gutta-percha golf ball, and the rubber-cored ball which came into use in 1902. Anderson also won the Western Open in 1902, 1904, 1908, and 1909.

Anderson's accuracy with all clubs, combined with his concentration under pressure, made him a formidable and highly respected competitor. Anderson made his living as a golf professional, working at ten different clubs in fourteen years. He listed the Apawamis Club in Rye, New York as his home course from 1901 through 1906.[2] He played many exhibition challenge matches for stakes, in addition to tournaments.[3]

Anderson died at age 31, officially from epilepsy[1] in Chestnut Hill, Philadelphia, Pennsylvania. Golf historian Robert Sommers wrote—incorrectly as it turned out—that Anderson 'drank himself to death'.[3] He is buried in Ivy Hill Cemetery in Philadelphia.[4]

Anderson was an original member of the PGA Hall of Fame, and was inducted into the World Golf Hall of Fame in 1975.

Willie Anderson (left) with Alex Smith, whom he beat in a playoff to win in 1901 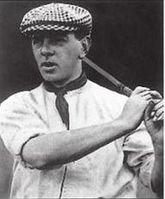