Henry William "Harry" Vardon (9 May 1870 – 20 March 1937) was a professional golfer from the Bailiwick of Jersey. He was a member of the fabled Great Triumvirate of the sport in his day, along with John Henry Taylor and James Braid. Vardon won The Open Championship a record six times and also won the 1900 U.S. Open.


Born in Grouville, Jersey, Channel Islands, Vardon, whose mother was French and father English, did not play much golf as a youngster, but showed natural talent for the sport as a young caddie in his teens. Harry and his brother Tom Vardon, younger by two years and also interested in golf, were very close. Their golf development was held back by poor family circumstances; and their father was not supportive of his sons' golf interest. Tom actually made the move from Jersey to England first, to pursue a golf career. Harry followed Tom to England in the spring of 1890, taking a job as greenkeeper at age 20, at Studley Royal Golf Club, Ripon, Yorks. A year later he became club professional at Bury Golf Club and in 1896 the club professional at Ganton Golf Club, in Yorkshire. Harry was the better player of the two brothers. By his early 20s, Harry developed a demanding practice program, the most ambitious seen to that time. He was the first professional golfer to play in knickerbockers – discarding the "proper" dress of an Englishman in an uncomfortable shirt and tie with a buttoned jacket.href="https://

Within a few years he became golf's first superstar since the days of Young Tom Morris. In 1896, Vardon won the first of his record six Open Championships (a record that still stands today). Vardon had great rivalries with James Braid and J.H. Taylor, who each won five Open Championships; together the three formed the 'Great Triumvirate', and dominated worldwide golf from the mid-1890s to the mid-1910s. These rivalries enormously increased the public's interest in golf.

In 1898 Harry Vardon won his second Open Championship at Prestwick, beating Willie Park, Jnr by a single stroke. Park missed a makeable putt on the 18th green to take the match to a play off. So aggrieved was Willie that he immediately offered a challenge to Vardon to play him over 72 holes, 36 holes at his home course of Musselburgh and 36 holes at a golf course of Vardon's choosing, for a wager of £100 per side. Willie Park, Jnr was not adverse to offering such challenges. Some years earlier he had met and defeated Ben Sayers at Musselburgh and North Berwick, and in 1897 Park defeated J.H. Taylor over two venues, also for £100 per side. Vardon refused Park's challenge. Besides the £100 per side, Vardon had nothing to gain from such a match, and he most certainly was not going to play Park at Musselburgh, where fan partisanship was less than courteous to rival players.

Eventually Willie Park, Jnr conceded to play his home leg at North Berwick instead of Musselburgh, and Vardon chose his home course of Ganton, Yorkshire. Golf Week magazine acted as both promoter and stakeholder, and the match took place in July 1899, by which time Vardon had won his third Open Championship. The British press billed the encounter as the greatest golf competition of all time. Such was the interest, that 10,000 Scottish fans attended the match at North Berwick, and that on a day when the Prince of Wales (later King Edward VII) was making a State visit to nearby Edinburgh. Special trains were laid on to ferry fans from Edinburgh and other nearby towns.

The first 36 holes at North Berwick ended with Vardon holding a two-hole lead, the format being match play. The second leg took place two weeks later at Ganton, and Vardon completed the rout, winning 11 up with ten holes to play, collecting the £200 prize and the glory.

He became golf's first international celebrity in 1900 when he toured the United States and Canada. John Henry Taylor, the 1900 Open Champion and member of the Great Triumvirate, also traveled to the USA on a mini tour in 1900. Vardon played in more than 90 matches and capped it off with a victory in the U.S. Open, where Taylor was second. Vardon wrote that while on this tour, he lost only two matches[6] while playing head-to-head against a single opponent, and both were against the Boston professional Bernard (Ben) Nicholls,[7] older brother of Gilbert Nicholls; the Nicholls brothers had recently emigrated from the British Isles.

In 1913, accompanied by Ted Ray, Vardon played in 45 exhibition matches winning 36 of them, and in 1920 at age 50, again accompanied by Ray, he played from July to the beginning of November in nearly 100 exhibition/challenge matches against the likes of Walter Hagen, Jim Barnes, Francis Ouimet and Bobby Jones.[8]

Vardon was the runner-up at his next U.S. Open in 1913, an event portrayed in the film The Greatest Game Ever Played. He toured North America with Ted Ray that year, as he did once more in 1920. At the age of 50, Vardon was again the runner-up in his third and final U.S. Open appearance, in 1920.

During his career, Vardon won 48 tournaments and 21 team events; that was the most titles won by a single player to that juncture in golf history. He won the German Open in 1911 and the British PGA Matchplay Championship in 1912. Between 1898 and 1899 Vardon played in 17 tournaments, winning 14 and coming 2nd in the other three. Vardon popularised the overlapping grip that bears his name, one still used by over 90 percent of golfers. In his later years, he became a golf course architect, designing several courses in Britain, Llandrindod Wells Golf Club, Woodhall Spa and Radcliffe-on-Trent being notable examples. Following a bout with tuberculosis, he struggled with health problems for years, but turned to coaching and writing golf instruction and inspirational books.

During his peak years, Vardon was known for his exceptional accuracy and control with all clubs, the greatest ever seen to that stage. However, after his comeback to the game following a prolonged absence while recovering from tuberculosis, he experienced serious problems with his short-range putting as a result of nerve damage to his right hand, and several commentators claim that he could have added to his list of majors had this disability not afflicted him.[5]

Vardon died in 1937 at the age 66, of pleurisy or possibly lung cancer,[9] at his home at 14 (now number 35) Totteridge Lane, Whetstone, London,[10][11] and is buried in St. Andrew's Church cemetery in Totteridge after a funeral service on 24 March.[1][12] That year, the PGA of America created the Vardon Trophy, now awarded annually to the player on the PGA Tour with the year's lowest adjusted scoring average. The British PGA also created the Harry Vardon Trophy which now serves as the award for the winner of the European Tour's Race to Dubai.

In 1974, Vardon was chosen as one of the initial group of inductees into the World Golf Hall of Fame. His most prestigious medals, including those from his six British Open Championships, are on display in a tribute to him at the Jersey Museum. In the annals of golf, he is considered one of the greats of the game. In 2000, Vardon was ranked as the 13th best golfer of all time by Golf Digest magazine.[13]

Vardon is often called "The Stylist", "Mr. Golf" and "The Icon of Golfing"; another nickname attached to him was "Greyhound".

Vardon was also well known for the Vardon Grip, or overlapping grip, the grip most popular among professional golfers. In the Vardon Grip, one places the little finger of the trailing hand (the one placed lower on the club – right hand for a right-handed player) in between the index and middle finger on the leading hand (the hand that is higher on the club). The leading-hand thumb should fit in the lifeline of the trailing hand. Vardon actually took up this grip some time after Johnny Laidlay, a champion Scottish amateur player, invented it. 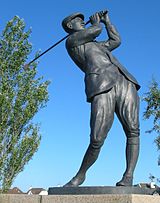 In 1913 he finished in second place, losing to amateur Francis Ouimet in an 18-hole playoff necessitated by Vardon missing a 10-foot (3.0 m) putt on the final hole of regulation. Vardon shot eight-over-par 304 (75-72-78-79). Ted Ray also was in the playoff, but shot himself out of contention by shooting 78. In the playoff Vardon shot a 77 while Ouimet shot a 72. The event was played southwest of Boston at The Country Club in Brookline, Massachusetts, across the road from Ouimet's home. The golf world was shocked when Vardon and Ray lost to the 20-year-old amateur.[5]

Vardon played in the U.S. Open for the last time in 1920 at the Inverness Club in Toledo, Ohio. He finished tied in second place, one stroke behind fellow Jerseyman, Ted Ray, missing a short putt on the final hole to force a playoff. Vardon shot eight-over-par 296 (74-73-71-78). St. Albans, England: Edgar & Co., 1920. 61p cloth. A man ahead of his time. Harry Vardon once said this man will become the best there has ever been. Tragically died at the age of 36 in Atlanta under rather mysterious circumstances. D&J E2260. More England: Edgar & Co., 1982. NEEDS EDITING61p. cloth. Reprint of the 1920 first and only edition. In rare reproduction of "The Gate". A man ahead of his time. Harry Vardon once said this man will become the best there has ever been. Tragically died at the age of 36 in..... More London: Hutchinson, ca 1925. 88p. cloth. Well illustrated. Dedicated to Harry Vardon "To Harry Vardon, because he was playing in the 1900 American Open Championship, which he won, he entirely missed the ball for a putt of only six inches" Chapters by Arthur Havers, Percy Alliss, Ted Ray, Charles Whitcombe..... More London: Stanley Paul, 1991. 184p. cloth.A different and "must read" look at Vardon's life from his own autobiography published in 1933, shedding more light on his brilliance and misfortune in health and personal life, than he would ever write about himself. D&J H25300. More Scotland: 1901. Rare original photograph of Taylor and Vardon in action, with crowds following.Written in Ink by Taylor 'Championship 2nd Day Muirfield 1901' Purchased by the consignor from Phylis Plumtree Taylor's daughter in 1987 approx 4 by 3.5 inches. Superb. More Nashville, TN: Rutledge Hill Press, 1999. 174p, cloth. 1999 reprint of the classic title that no doubt inspired many golfers to greater things. The US edition of Progressive Golf. More England: Edgar & Co., 1982. 61p. cloth. Reprint of the 1920 first and only edition. A man ahead of his time. Harry Vardon once said this man will become the best there has ever been. Tragically died at the age of 36 in Atlanta in August 1921 under rather mysterious..... More